I'm late posting photos of the cards created for this month's class swap.  Being under the weather for the better part of six days put me way behind, but it feels great to be back in my stamp room!  In case you don't know about the class swaps, those who attend my monthly class decide on a swap theme for the next month's class.  The March theme was to feature a color combination using 3 to 4 colors from one of Stampin' Up!'s color collections.  The fun thing about a color combo theme is that it can seem that none of the cards have anything in common, except the theme which is definitely not apparent when looking at these creations:

﻿
﻿
﻿
And lastly, this is the card that I created for the swap.  It features colors from the Brights Collection that I sponged onto a piece of Irresistibly Floral DSP. 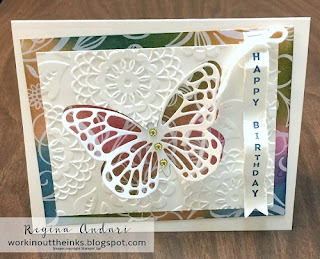 You might still have snow on the ground, but you will be bringing Spring into someone’s life. Make this bright and cheerful floral card set for a cherished friend. You will learn to make three different shaped cards (a flower pot, a cupcake and a triangle). These shaped cards will WOW! the recipients and will make you the star. Also, learn how to add movements to small embellishments with an easy step. 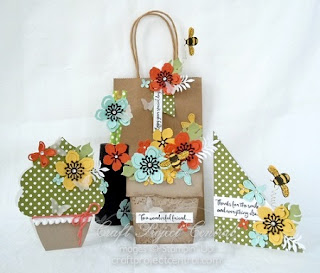 Shaped cards are a favorite of mine, and the ones in this ensemble are fantastic!  The tutorial for this pretty project, which was designed by Monika Davis, can be found at Craft Project Central.  Monika really did a great job, and I love those bees!

"GUY GREETINGS" TO THE RESCUE

Over the weekend, I remembered that I needed to put a masculine birthday card in the mail.  Anyone who enjoys making cards would probably agree that the most challenging cards to make are masculine.  It is so hard to avoid bows and other frills (embellishments) that typically cater to the female persuasion.  I had some uninterrupted time alone at home on Saturday, so I busied myself with the task of creating a fantastic masculine card--one fit for a special 89-year-old man.  I knew what kind of card I was going to make, so I only needed to choose "the right" designer paper and a couple of stamps.  I didn't expect the process to take as long as it did, and I had a real "what the heck!" moment as I pleasantly held the finished card in my hand and wondered WHY I had put not one--but TWO--bows on it.  People say they "lose themselves" when they get a creative vibe, and I'd say that I really lost myself/my focus.  While I thought that the die-cut dragonfly on the front of the card was gender neutral, I'm not sure what possessed me to add the pretty Wink of Stella glimmer to the wings.  The card that I had spent all afternoon working on turned out to not be what I needed and, if you must know, I decided that the designer paper wasn't all that masculine, either.  The next day, I guess I found myself and was able to create this card, which I considered masculine enough--even with those pretty sequins.  At least they're a nice gun metal gray, right? 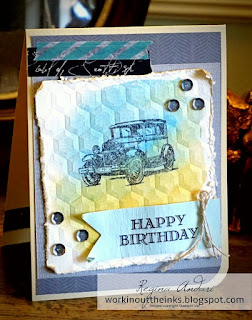 I think my favorite thing about this card is that it's so full of texture.  There's layered washi tape, watercolor paper (which has been embossed and distressed), linen thread, a vellum layer, and the fibers in the cardstock for the sentiment were weakened to give it some texture and make it pleasantly pliable.  And those sequins, of course.  Sequins are my current obsession.  I simply can't get enough of them, and I want to put them on every card that I make.
I wasn't even going to share a picture of the masculine card that turned out to be not so masculine, but this is part of the front of it: 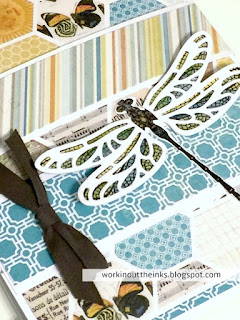 Spring is in the air, and you need some little gift packaging ideas to go along with it! This tutorial will teach you how to make a little purse bag, gift card/nugget candy bar holder, and a little square window treat box. They all feature the beautiful Special Reason Bundle and Falling in Love Designer Series Paper. This would also make a wonderful product-based packaging class. 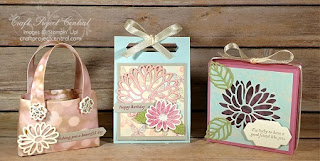 Don't you love the colors of this ensemble?  The tutorial for this gorgeous gift packaging trio, which was designed by Christy Fulk, can be found at Craft Project Central.  Have you subscribed yet?
Posted by Regina Andari - workinouttheinks.blogspot.com at 3/21/2017 10:30:00 AM No comments:

My great-niece had a birthday this month, and I knew exactly what kind of fun card to make for her . . . a pop-out box card!  This is what the festive front looked like: 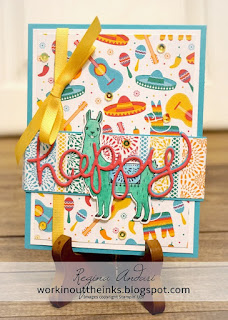 And with the band removed, the card springs open to reveal a pop-up box: 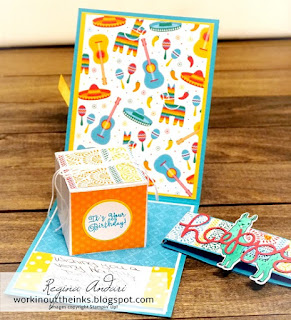 The Celebrate Each Year Memory Book contains 20 pages with photographs from birth to age 18. It is simple to create because it uses the Project Life by Stampin’ Up!® 6” x 8” photo pocket pages. Just slip your photographs into the pocket pages and add printed cards and accessories. The Celebrate Each Year Memory Book is a one-of-a-kind gift that will be treasured for years. 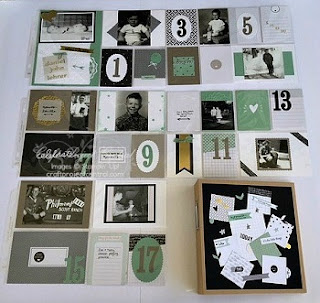 The tutorial for this fantastic project, which was designed by Sue Lehrer, can be found at Craft Project Central.
Posted by Regina Andari - workinouttheinks.blogspot.com at 3/16/2017 10:30:00 AM No comments:

This month's Creating Pretty Cards - Card Challenge #69 at Craft Project Central is one like you have probably never done.  Well . . . that was the case for me.  I actually had to give it a bit of thought, but I thoroughly enjoyed it once I had an idea.  This is the card that I designed: 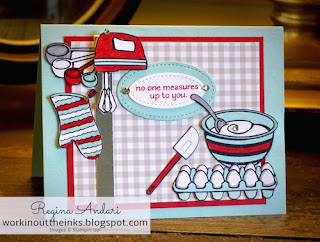 My card features images from Stampin' Up!'s Perfect Mix stamp set, which I colored with Pool Party, Real Red, and Smoky Slate markers.  Once the images were colored, I used Paper Snips to cut them out and then began the task of positioning them "just right".  It's hard to tell from the photo, but that's a strip of Silver Foil paper on the front left of the designer paper.

Buffy Cooper designed the sketch, which looks like this: 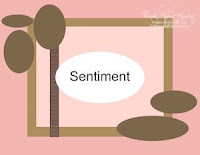 And this is the card sample that Buffy created for the challenge:


Did you know that for every 10 cards that are created and uploaded HERE for Sketch Challenge #69, a winner will be drawn to receive a FREE one-month subscription to Craft Project Central?  It's really that easy, so I would encourage YOU to create and upload a card for the challenge!
Posted by Regina Andari - workinouttheinks.blogspot.com at 3/12/2017 05:31:00 PM 4 comments:

I am really late drawing the winners of two FREE Craft Project Central subscriptions, and I am very, very sorry for not keeping my word.  The good news is that my son did the drawings for me today!

The February subscription that I had to give away was mentioned in THIS BLOG POST on February 26th.  I appreciate all of the comments, and the winner is LISA808.  Lisa, to get your subscription started, just email me at randari at hotmail dot com.

The March subscription that I had to give away was mentioned in THIS BLOG POST on March 1st.  Again, I really appreciate the comments, but there's only one subscription to give away.  The winner is JEANETTE.  Jeanette, if you will email me at randari at hotmail dot com, we will get your subscription started.

In my next blog post, I will tell you another way that you can get your name entered in another drawing for a FREE one-month subscription!

In this tutorial you’ll learn how to easily make a pretty succulent garden frame and a matching card!  This is a perfect gift for friends, teachers, neighbors, etc.!  Make multiple sets and make sure to keep one for yourself! 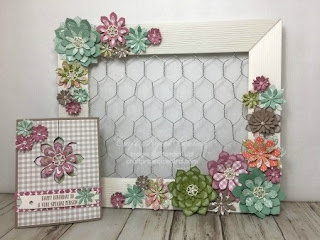 The tutorial for this beautiful project, which was designed by Meg Holland, can be found at Craft Project Central.
Posted by Regina Andari - workinouttheinks.blogspot.com at 3/11/2017 10:30:00 AM No comments:

This pretty collection of Easter baskets and treats will welcome your guests to the table for your brunch or dinner.  Two options of baskets show off the Succulent Garden Designer Series Paper, as well as the candy wrappers, and table place cards.  The Easter card can serve as an invitation or simply a pretty greeting! 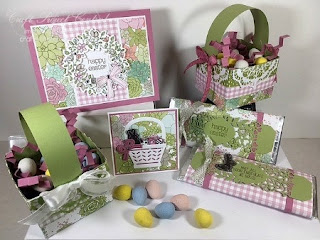 Isn't this a gorgeous ensemble that Karen Hallam created?  You can find her tutorial at Craft Project Central, and don't forget to start your subscription today so you won't miss out on the awesome projects this month!
Posted by Regina Andari - workinouttheinks.blogspot.com at 3/06/2017 10:30:00 AM No comments:

Each month in addition to the great 3D projects that Craft Project Central has for you, they also host a monthly card challenge – Creating Pretty Cards!! To help you recreate the sketch each month, they also provide a free Sketch Mini Tutorial! This mini tutorial has information about how the inspiration card (using the sketch) was created, supplies used, and basic measurements!!  For every ten cards submitted, they’ll pick one winner of a free one month subscription! The winner(s) will get to select the month of their choice! Head over to Craft Project Central to learn more and submit your creation!!


This month's sketch was designed by Buffy Cooper, and following is the card that she designed: 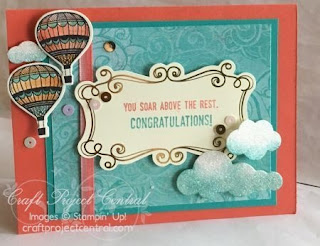 And this is the sketch: 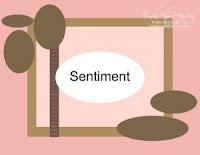 Kicking off the March edition of fantastic project tutorials at Craft Project Central is the project that I designed.  Following is the introduction that I wrote for my project:
Every now and then, a special someone could use a little note of encouragement.  That person could be a child/student, friend, co-worker, neighbor, etc.  When you follow this tutorial, you’ll not only be prepared with a selection of cards, you’ll be able to find them easily tucked neatly in their own little pizza-style box.  This tutorial includes three feminine cards and three masculine designs—something for everyone.  This project would also make a great gift, so why not make an extra set to share? 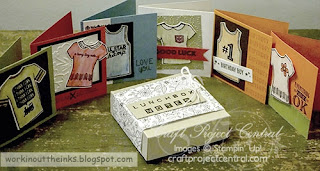 FREE SUBSCRIPTION TO CRAFT PROJECT CENTRAL . . . If you would like to get your name in the drawing for a FREE one-month subscription to the awesome project tutorials at Craft Project Central, just click THIS LINK and leave a comment below my project photo (the same photo as shown in this post).  On March 7th, I will draw the winning name and announce it right here on my blog, so be sure to visit again on the 7th to see if you're the winner! 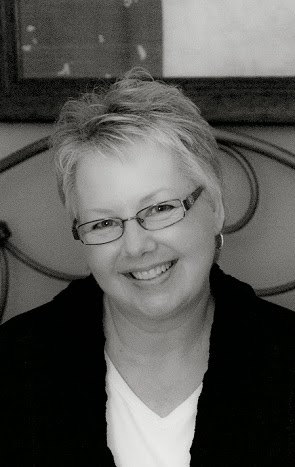 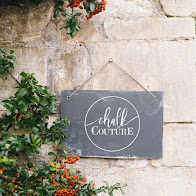 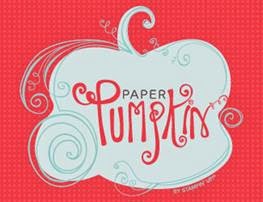